The results of the 17th Lok Sabha elections have been announced and in a decisive mandate, the Narendra Modi-led National Democratic Alliance (NDA) has been voted back to power with a clear, resounding majority. At the outset, I would like to congratulate the Prime Minister and his entire team for this thumping success. It is very heartening to note that amidst the chaos prevalent before and during the elections, the citizens of India have acted in a mature manner and have voted sensibly.

As the new government takes up the task of moving ahead with and accelerating the unfinished agenda, it is time for us to take home a few learnings.

A cursory glance at the names of the candidates who lost suggests that the Indian voter has matured and has rejected a candidate whose primary raison d’etre has been that he / she is the son / daughter / relative of an established politician. The writing is on the wall – there is no room for dynasty politics. The successor has to prove his credentials and cannot bask only on past glory. As many middle-aged professionals see their sons qualify the CA examinations and introduce them into the family practice, both the parent and the child would be well advised to bear this aspect in mind while planning the succession in the firm so that the clients and the team accept the successor in his own right and not under the shadow of the parent.

The entire plank of the opposition was built on the premise of criticism and a one-point agenda to stop Modi from returning to power. In the absence of a constructive agenda, the citizens were mature enough to turn a blind eye to such criticism and move to the party which focussed on and promised growth, stability and national pride.

As professionals, scepticism is built into our approach and conduct. But a thin line divides the concept of scepticism from criticism. While we may have reasons to not like many facets of the law, regulations and the environment, clients may not perceive value from criticism of such provisions. The advice and conduct of a professional have to provide value and solutions rather than mere criticism. The unjust aspects of the law may be addressed suitably through representations before appropriate forums.

One of the factors which perhaps worked in favour of the NDA was the open communication channels and regular interactions with various stakeholders. Such interactions kept the government connected with the ground-level realities and helped it to provide tangible benefits to the citizens. Isn’t it time that we increase our interaction levels with our clients as well? When was the last time that we had a no-agenda meeting with our clients? Such gestures of genuine care create connectivity and help in ensuring long-term growth of our profession.

One more striking feature of the elections was the extensive use (and perhaps abuse as well) of technology. Information spread like fire on social media. A random glance at a few such posts would highlight the extent of creativity (perhaps wasted!) latent amongst the citizens. As professionals, it is important for us as well to harness the use of technology in our activities and also be active on social media for projecting the right image and value proposition of the profession.

One can go on and on; there are many learnings from the election results and I will leave it to each one of you to reflect and ponder upon some of these and implement them in your professional practice. One clear message from the results is about the way forward. It is more than evident that the unfinished agenda will be taken up at a much faster pace. This will imply many regulatory changes. As chartered accountants, we have time and again demonstrated our ability to act as catalysts in case of such regulatory changes. Such changes also present professional opportunities to us and therefore we should gear ourselves up and look out for emerging opportunities that may come our way.

At the same time, we would also be moving towards a stricter framework, which would bring with it the associated professional risks. We need to ensure that our technical skills, conduct and documentation jointly help us in ensuring that such professional risks are reduced to the minimum extent possible.

Closer home, the new team for the coming BCAS year is already in place. I wish Manish Sampat, President-Elect, and his team all the best for an eventful year ahead. Please feel free to send in your suggestions for the activities that you would like to witness at the BCAS during the coming year. 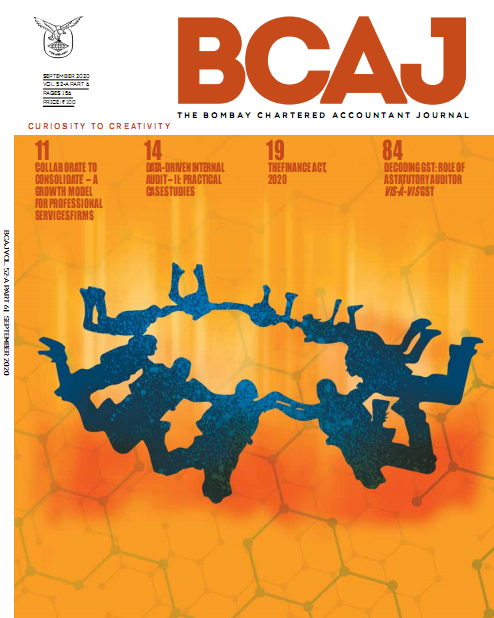